A recent study published in the Journal of Biomechanics underpins previous concerns about the increased risk of falls when non-neurologic impaired individuals are prescribed solid, non-articulated AFO braces.(1).  Nevisipour and Honeycutt studied 10 young healthy subjects who had no neurologic deficits to learn the effects of a semi-rigid plastic AFO (See Figure 1) on the compensatory stepping response after perturbation while standing on a treadmill.   Kinematic and kinetic data were collected during perturbations simulating forward trips and included: trunk angle and angular velocity, step length, Center Of Mass-Boundary Of Stability, reaction time, step duration, ankle angle and angular velocity, foot progression angle, angular velocity, propulsive impulse of the stepping leg, and step width. (See Figure 2)  The researchers compared the first compensatory step after perturbation between 3 conditions: (1) AFO on the stepping leg (AFO-step), (2) AFO on the supporting leg (AFO-support), and (3) No-AFO.  Stepping is a common compensation after perturbation or tripping where the leg is moved rapidly forward and placed down under the body’s center of mass which is falling forward.

Figure 1:  Semi-Rigid AFO used in study by Nevisipour and Honeycutt 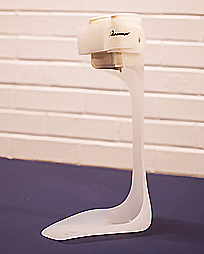 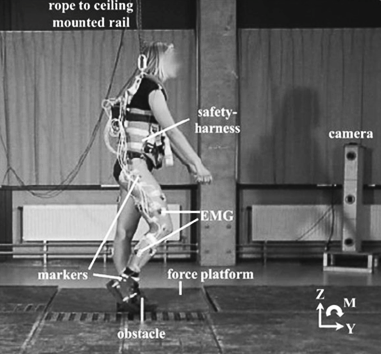 The results of the study showed that when the subjects wore the semi-rigid AFO on the stepping leg during perturbation, they experienced decreased ankle motion, decreased foot progression, and lower propulsive impulse of the step.  Furthermore, the AFO on the stepping leg caused a larger trunk angle and larger trunk angular velocity, smaller step length, and reduced center of mass boundary of support (COM-BOS) compared to the No-AFO condition.   All of these findings document a reduced or compromised stepping response which is normally used to prevent a fall.  Specifically, an AFO on the stepping leg negatively affected the compensatory stepping response by decreasing trunk stability (increased trunk angle and angular velocity), shortening the step, and reducing dynamic stability (smaller COM-BOS). When the AFO was worn on the support leg, the changes in response to tripping were not significant compared to the No-AFO condition.

According to Nevisipour and Honeycutt, the findings of their study highlighted the role of ankle joint plantarflexion for the generation of compensatory stepping mechanisms in response to tripping and falling.  The researchers suggested that articulated AFO devices which allow plantarflexion should be studied as they would appear to be better alternatives to semi-rigid and rigid designs in terms of reducing the risk of traumatic falls. Ironically, semi-rigid AFO braces are commonly prescribed to control foot drop in stroke patients, yet these devices may actually increase falls risk.  Nevisipour and Honeycutt cited a study by Nikamp et al which showed that, individuals who wear a semi-rigid AFO during the first 8 weeks after a stroke are 2.75 times more likely to fall compared to individuals who have a clinical need for an AFO but are not prescribed it until 8 weeks post-stroke.(2)

In their published study, Nevisipour and Honeycutt recognize that patients who have suffered a stroke are at risk of falling due to foot drop and other neurologic impairments. Concerns about how the AFO might affect balance and increase falls risk in stroke patients became the impetus of the study conducted by Nevisipour and Honeycutt. However, the researchers chose to study the effects of the semi-rigid AFO brace on healthy, non-neurologic impaired subjects so that they would get a more clear understanding of how the brace affects compensatory stepping mechanics.  Certainly one would expect that stroke-related impairments would only add to the reduced compensation and compromise of stepping mechanics caused by an AFO in the avoidance of a fall after perturbation.

What about prescribing bilateral “Balance Braces”?

This new research brings up an important question for clinicians who prescribe so-called “balance braces” to non-neurologic impaired elderly patients under the premise that such braces will prevent catastrophic falls.  Without any studies which verify that semi-rigid, non-articulated plastic AFO braces actually prevent falls, several marketing companies continue to promote the prescription of these devices to elderly patients who are at risk for falling due to the global effect of aging.(3)   Three studies sponsored by the company who originally launched the “balance brace” revealed, not surprisingly that wearing these bilateral semi-rigid AFO braces will:  not improve dynamic balance (4), will not reduce the fear of falling (5) and will not reduce the incidence of falls (6).

The concept of prescribing bilateral AFO braces to elderly patients runs contrary to common practice where unilateral bracing is usually indicated for management of patients with stroke, adult acquired flatfoot or post traumatic arthritis.(7). The recent study conducted by Nevisipour and Honeycutt used a unilateral semi-rigid AFO brace and showed that when that brace was worn on the “stepping leg” during perturbation, the preventive compensation mechanism was significantly compromised.  When the non-braced extremity acted as the stepping leg and the stance leg was braced, there was minimal compromise. Thus, when wearing a semi-rigid AFO brace unilateral, there is a 50% chance that the contralateral non-braced leg will serve as a stepping leg and there will be no compromise. When bilateral semi-rigid balance braces are worn, there is a 100% chance that the stepping leg will be compromised to prevent a fall.

Besides concerns about bilateral balance bracing, clinicians should be aware of compromise of balance and increased risk of falling whenever a restrictive non-articulated AFO brace is dispensed to an elderly patient for any musculoskeletal condition.

Researchers have shown that solid plastic, non-articulating AFO devices have negative effects on balance in many studies of various patient populations. (8-14) While some companies promote so-called “balance braces” as being “dynamic AFOs,” scrutiny of the true design of these devices reveals that they are actually “static AFOs.”  Balance braces are solid plastic shells with trim lines that actually provide more stiffness than traditional semi-rigid AFOs. 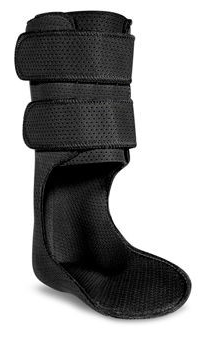 An article from Cattaneo and colleagues defines “static” versus “dynamic” AFO devices.(15) Under the definition from the authors, the original balance brace design and all copies of this AFO design on the market would be considered “static” AFO devices. They do not meet the criteria for “dynamic” devices, which have ankle joints and allow free plantarflexion. No matter how thin or flexible the plastic shell, static AFOs will limit ankle joint motion more than the non-brace condition. Walking boots, a.k.a. controlled ankle motion (CAM) walkers, are solid ankle-foot orthoses that also contain a rocker sole, which can further exacerbate the gait disturbances that this type of brace can impose on the frail elderly patient.

Static, non-articulating AFO braces have the potential to significantly decrease proprioception and balance in the lower extremity via several mechanisms. Crabtree and Higginson point out that patients must generate significantly greater ankle plantarflexion strength to deform the plastic shell of a non-articulated AFO to achieve normal toe-off during gait.(16)

In their study of healthy patients wearing a solid plastic shell AFO, Vistamehr and coworkers found that ankle plantarflexor power and forward propulsion were significantly less with the solid AFO due to the device limiting the ankle range of motion.(10) In this same study, whole body angular momentum was higher with the AFO during both steady state and non-steady state walking conditions, indicating a loss of dynamic balance. The researchers concluded: “Solid ankle-foot orthoses limit the successful execution of important mobility subtasks in healthy adults and that the prescription of ankle-foot-orthosis should be carefully considered.”(10)

An overlooked mechanism by which solid, non-articulating AFO devices can inhibit lower extremity proprioception is their effects on sensory receptors located in muscles, tendons and ligaments. These receptors are part of the Golgi tendon organs as well as the muscle spindles. Ankle joint motion provides a critical stimulus to these proprioceptors located in the ankle ligaments as well as the muscles and tendons of the lower leg.(17,18) Movements of the ankle joint create tension in the mechanoreceptors located in these structures, which transmit essential information to the central nervous system regarding postural sway.

Another negative effect of restrictive non-articulated static bracing of the ankle is the effect on muscular stabilization for balance control. Authors have described an “ankle strategy” in which upright balance is maintained by muscular stabilization of the body over the foot at the ankle joint.(22,23) In this mechanism, the patient will move the ankle and subtalar joint to correct alignment of the body, and keep the center of mass properly positioned over the supportive foot. By restricting ankle joint movement with solid bracing, Bennell and colleagues point out that patients will have to adapt with more proximal muscle activation using the “hip strategy,” which is less efficient at maintaining upright balance.(24)

Adult Acquired Flatfoot: What should be the preferred brace?

A common practice for treating Adult Acquired Flatfoot is the use of solid gauntlet AFO’s. (See Figure 3)  This practice continues despite the fact that articulated AFO’s provide better control of the adult acquired flatfoot deformity than non-articulated solid gauntlet AFOs. (25).  Of further concern is the compromise of dynamic balance and compensation to recover from tripping when a rigid AFO brace is worn, as evidenced by the recent study. (1) 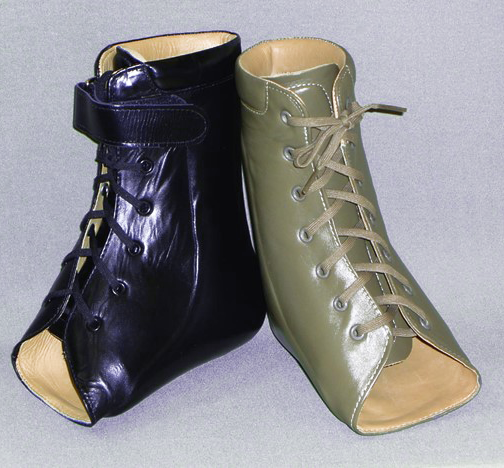 What is the takeaway? 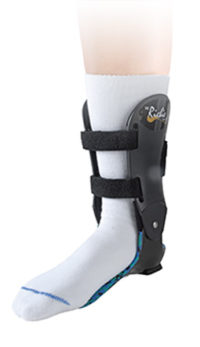 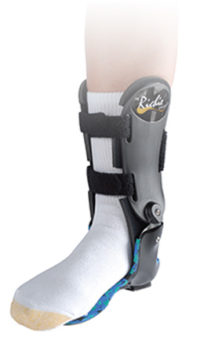 About the Author: Doug Richie, DPM

Dr. Richie is a Clinical Associate Professor at the California School of Podiatric Medicine.  He has authored many original articles published in peer-reviewed medical journals as well as several chapters in respected textbooks of foot and ankle surgery.  Dr. Richie recently published his own textbook titled Pathomechanics of Common Foot Disorders which is available at https://link.springer.com/book/10.1007/978-3-030-54201-6.  Dr. Richie is a Fellow and Past President of the American Academy of Podiatric Sports Medicine and is a Fellow of the American College of Foot and Ankle Surgeons. Dr. Richie designed and launched the Richie Brace(R) line of custom ankle-foot orthoses in 1996 which are now distributed in seven countries around the world.