Several foot and ankle surgical companies such as  Arthrex, Crossroads, Paragon 28, and Treace Medical are marketing direct to the consumer on the internet to promote their technologies while also featuring  “Find a Doctor” tools .

Of concern, two surgical companies are marketing directly to consumers (patients) on the internet and touting questionable advantages of “3-D and 4-D” correction of bunions utilizing a modified Lapidus procedure.   Practitioners are now reporting frustration with having to defend their recommendation of traditional surgical procedures for hallux valgus deformity (HAV) when patients confront them with un-substantiated claims which they read on the internet posted by surgical companies. (1)

Let’s take a deep dive and see if the claims made by surgical companies on the internet about the superiority of “3-D or 4-D” bunion correction really hold up to scientific scrutiny.

Claim #1:   Addressing the “Root Cause” of the bunion while all other procedures do not.

A central theme is posted on the Treace Medical website promoting the Lapiplasty® procedure (2):

“Patented advanced technology designed to correct all three dimensions of the bunion at the root of the problem ( unstable joint). While the majority of bunion surgery is only 2D and fails to address the root cause, Lapiplasty® provides a 3D correction and secures the unstable joint. “

Fusion Orthopedics makes a similar claim in their advertising of the LapiLock bunionectomy procedure (3):

“A root cause of some bunions is the genetically unstable cuneiform joint, which often remains uncorrected!”

FACT:  There is no credible evidence that an unstable first metatarsocuneiform joint precedes or causes hallux valgus deformity.

Published research shows that instability of the first metatarsocuneiform joint in all thee planes is the result of, not the cause of HAV deformity. (4-8)

In a pivotal study, Munuera and co-workers evaluated 49 patients with early onset of hallux valgus deformity and compared radiographic measures to 49 healthy controls.(9)  While lateral deviation of the hallux was present only in the HAV group, an insignificant difference of intermetatarsal angle (1-2 IMA) was shown in both groups.  Munera and co-workers concluded that medial deviation of the first metatarsal which is shown in progressive HAV deformity occurs as a result of lateral deviation of the hallux.  They cite the works of Sanders and Snijders who used cadaver models to demonstrate the powerful mechanical effect of a deviated hallux on the more proximal located first metatarsocuneiform joint.(10,11)

Ironically, Paul Dayton who is a co-owner of the patent for the Lapiplasty® procedure published a paper citing the research of Munuera et al and Snijders et al and supported the theory that the hallux, not the first metatarsocuneiform joint, was the driving force of HAV deformity. (12)  In his cadaver study, Dayton showed how lateral deviation of the hallux caused retrograde medial deviation of the first metatarsal and concluded:

“From these observations, it is possible that the hallux could drive the proximal changes in the first ray that lead to metatarsus primus adducto valgus deformity.”

“80% of bunions are misaligned in 3 dimensions”

FACT:  A pronated position of the first metatarsal is not peculiar to hallux valgus

The so-called third dimension of the bunion deformity was described by Lapiplasty pioneer Paul Dayton in 2014, who cited previous literature describing an everted position of the first metatarsal to the ground in HAV patients.  (13)  Subsequently, several studies showed that an everted or pronated position of the first metatarsal is not peculiar to hallux valgus deformity, but is a result of whole foot pronation.(14,15)

Claim #3: A Lapidus procedure which includes inversion rotation of the first metatarsal is necessary to correct all planes of the hallux valgus deformity.

From the Lapiplasty® internet site (2):

Osteotomies target the cosmetic bump by cutting and shifting the bone in 2D, but do not address all 3 dimensions of the deformity or the unstable foundation.

Three studies, using simulated weight bearing CT imaging tracked the displacement of the bones along the medial column of the foot of patients with HAV deformity and healthy controls as the foot moved from an un-loaded to a fully loaded position. (7,8,23)  These studies show that, at the first metatarsocuneiform joint, the first metatarsal was observed to move in the direction of inversion, dorsiflexion and adduction.

The rotational deformity of HAV seen at the first metatarsocuneiform joint is in the direction of INVERSION and rotating that joint further into inversion would seem counter-intuitive.  See this weight bearing CT image of an HAV patient: 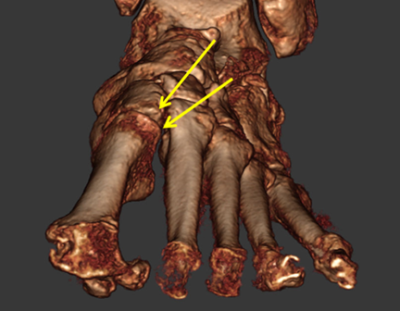 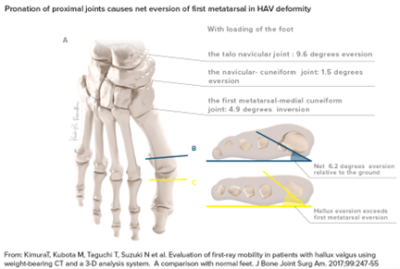 If  inversion rotation of a joint were necessary to reduce pronation deformity in hallux valgus, then the surgeon would have to focus on the talonavicular joint, not the first metatarsocuneiform joint which is already inverted.

Kimura showed that in patients with hallux valgus, the actual pronation deformity originates at the talonavicular joint, not the first metatarsocuneiform joint.(8) With loading, the study authors observed the following bone segments to rotate in this magnitude and direction:

Conclusion:  The net motion of the entire medial column results in 6.2 degrees of eversion and this motion originates in the talonavicular joint, not the first metatarsocuneiform joint.

Claim #4: Patients are told that all other bunion procedures have a high failure rate.

From the Lapiplasty® site (2):

“70%  of bunion patients may have their bunion return over time”

“1 in 3 patients are dissatisfied after osteotomy bunion surgery”

FACT: A review of all published research shows a low recurrence rate and high patient satisfaction with all types of bunionectomy surgery.

The statements about high recurrence and low satisfaction with standard bunion surgery found on the Lapiplasty® internet site cites one study of 77 patients which was published from a single institution in Finland. (24)  What is not cited is a high level study published in the most prestigious orthopedic surgery journal in the world.   Barg and co-workers conducted a systematic review of 229 studies of all common types of hallux valgus surgery published in the medical literature. (25)  Dissatisfaction with the results of surgery in 12, 866 patients was 10.6%.  Residual pain in the great toe joint was found in only 1.5% of patients.   More important, the rate of recurrence of hallux valgus deformity across all types of surgical procedures was 4.9%.

Promoting medical technologies on the internet can be an effective and constructive method of patient education.  Many companies, including my own, feature educational tabs on their websites in order to provide an overview of scientific research in a simplified and meaningful format for the lay public to interpret.   Touting new insights and theories supporting innovative technologies is perfectly acceptable as long as there is sound science supporting the claims.

About the Author: Doug Richie, DPM

Dr. Richie is a Clinical Associate Professor at the California School of Podiatric Medicine.  He has authored many original articles published in peer-reviewed medical journals as well as several chapters in respected textbooks of foot and ankle surgery.  Dr. Richie recently published his own textbook titled Pathomechanics of Common Foot Disorders which is available at https://link.springer.com/book/10.1007/978-3-030-54201-6.  Dr. Richie is a Fellow and Past President of the American Academy of Podiatric Sports Medicine and is a Fellow of the American College of Foot and Ankle Surgeons. Dr. Richie designed and launched the Richie Brace(R) line of custom ankle-foot orthoses in 1996 which are now distributed in seven countries around the world.